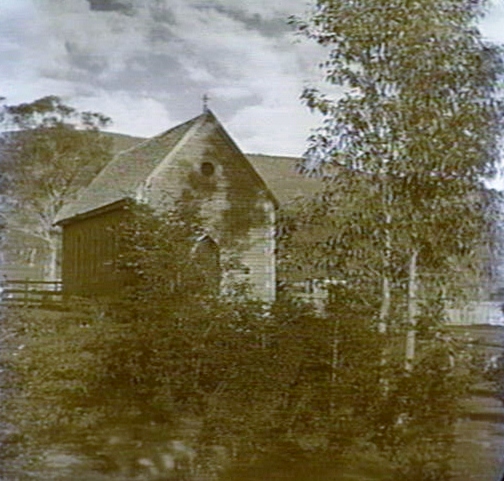 1878 - Blowering - The chairman informed the committee that the residents of Blowering contemplated building a small neat church upon a site which had been granted there for the purpose. It was thereupon resolved to aid the Blowering people in their object by presenting them with sorao of the windows formerly used in the Tumut church, which had been taken down to make room for the present structure. - (Ref- The Sydney Morning Herald (NSW : 1842 - 1954)(about) Previous issue Monday 25 February 1878).

TUMUT NEWS. [from our correspondent.]

OPENING OF THE ANGLICAN CHURCH AT BLOWERING.

The neat little church, known as St. Simon's, recently erected at Bloworing, on a site very kindly given for the purpose by Mr. William Bourke, of that place, was opened on Thursday last, 28th inst., being St. Simon and St. Jude's day.

The weather was all that could be desired, and the parishioners, who, according to appointment, assembled near the vicarage at 7 a.m.. found the morning air cool and bracing.

At 7.30 the various vehicles made a start, followed by many ladies and gentlemen on horse back. The journey out to Blowering and back proved very enjoyable. Nature was decked in her gayest garb; picturesque homesteads peeped out from amid green fields of waving grain, while the sun's warm rays were tempored by a delicious breeze.

Arrived at their destination, the Tumut visitors were joined by a host of others from both sides of the river, and at 10 o'clock the little church was filled with worshippers, while numbers remained without, unable to gain admittance.

Morning prayer was read by the Rev. G. Spencer. The leader of the Tumut choir, with the assistance of several other ladies (without the aid of instrumental music), rendered in an offective manner several hymns suitable to the occasion, viz., 438th, 'The church's one foundation; 436th, ' We love the place, 0 God ; and 490th, 'All people that on earth do dwell.'

The Rev. J. H. Williams, vicar of Gundagai, preached a plain, practical sermon on the 1st verse of the 122nd Psalm, 'I was glad when they said unto me, Let us go into the House of the Lord.' In an impressive manner the rev. gentleman reminded his hearers that in the Garden of Eden man worshipped his Creator in a house not made with hands. Gradually he led them on to the building of the first temple, and then to the duties incumbent upon Christians in modern times, not only of erectiug and furnishing churches, but of regularly frequenting these houses of the Lord, and the spirit and attitude in which the worshipper should come. Persons sometimes merely went to church to hear some celebrated or eloquent preacher, forgetting or lightly esteeming the more important duties of prayer and praise.

The Vicar concluded with some earnest practical observations, trusting that his hearers, and those who should hereafter assomble in that church, would in their own experience realise the testimony of the Psalmist, and be glad when they went into the house of the Lord.

After the sermon, the Rev. G. Spencer made a few remarks upon church affairs. The offertory was then collected by Messrs. E. G. Brown and T. Wilkinson; it amounted to Ł25. The Rev. Mr. Williams pronounced the benediction, and the congregation dispersed.

Shortly afterwards the company were summoned to a sumptuous lunoh, tastefully laid out in a spacious booth. The appetising viands and choice confections, provided and served by the ladies of Talbingo, Yallowin, and Blowering were thoroughly enjoyed. The fair caterers were determined that there should be enough and to spare, for, large as was the assemblage, half as many more hungry guests could have been entertained. The young people then betook themselves to various games, and all went merry for awhile.

But presently the bruce auction commenced, and Mr. E. G. Brown's witty sallies, as he performed the auctioneer's duties, created much mirth, and the cattle, and horses, and fancy goods were satisfactorily disposed of.

The sale concluding, Mr. Brown stood up in the booth, and said he had been asked by their vicar to say a few words. He had great pleasure in being amongst them. He felt quite at home at Blowering. When he came there first he was only fifteen years of age. The place was a wilderness. On the spot where they stood he had mustered cattle; now they behold numerous farm-houses, and signs of a growing population and busy, industries all around them, and, within sight, they had the best possible evidence of the wonderful progress that was making in the pretty little church opened that day, and in the school adjoining. He congratulated the people upon what they had accomplished, and trusted they would go on to prosper. (Cheers.)

The Rev. G. Spencer said, then asked their friend the Rev. Mr. Williams to address them, he would call upon the company to give three cheers for the ladies, to whom they were deeply indebted, not only for the excellent repast of which they had partaken, but also for a large portion of the success which had attended them that day. A hearty response followed.

The Vicar then, in a few well-chosen words, drew attention to the great kindness they had received from Mr. William Bourke, who had given 'them the valuable site on which the church was built. Mr. Bourke had executed necessary documents to the Bishop, thus completing his gift of the piece of ground, He would ask them to give three cordial cheers for Mr. William Bourke. These were enthusiastically given.

The Rev. J. H. Williams then addressed a few words of counsel to those assembled, saying that it would be a day long remembered by him, and he esteemed it a high privilege to have preached the first sermon in their new church. (Cheers.)

Mr. R. M. Shelley briefly proposed a vote of thanks to their visitors, especially to the Rev. Mr. Williams, who had come so far to assist them. Three cheers for Mr. and Mrs. Williams were then warmly given, and afterwards the company similar expressions of gratitude to Mr and Mrs. Spencer.

After spending a very happy day, the assembly dispersed to their homes.

The church of St. Simon is a neat Gothic structure, designed by Canon Soares. It is built of brick on a stone foundation; outside the walls are dressings of cement. The windows are those formerly used in the Tumut church.

The building inside is 30 feet by 16 feet. The walls are 13 feet from the floor to the top of the brickwork. The iron finial or cross formerly used at All Saints' Church surmounts the western gable. Much work remains for some future occasion ; but the church, as it stands, is a very pretty, commodious little edifice, and is faithfully built. (By tho way, cheers were given for the contractors, Messrs. Kinred Bros. were the company separated.

The church cost Ł300, and a debt remained at the opening of Ł160. The proceeds of the opening day will about reduce the debt to a level Ł100, and thus the Anglicans of Blowering and the neighberhood have accomplished a very creditable work.

I learn that a fatal accident occurrod near Adelong on Saturday evening, a mun boing killed by a fall from his horse. Tho coroner is to hold an inquost on Monday (yesterday). Dr. Large and Mrs. Largo arrived in Tumut on T'tnilnv nrnnnif* «vn/l wnrn wnlnnmnil twirHinV af their old friends. I am happy to say that Dr. Large, who was dangerously ill on leaving Wagga, has improved in health since his arrival here. - (REf- The Gundagai Times and Tumut, Adelong and Murrumbidgee District Advertiser (NSW : 1868 - 1931) (about) Previous issue Tuesday 2 November 1880 Next issue Previous page 2 - per Lyn Langley)

The Lord Bishop of Goulburn, who is on a tour through his diocese, is to arrive here on Saturday afternoon next. On Sunday morning and evening his lordship preaches in All Saints' Church; In the afternoon of the same day he officiates at Adelong. On Monday there is to be a tea meeting at Blowering, and the Bishop will lay the foundation stone of a new church there.

On Tuesday the rite of confirmation is to be administered in ll Saints', Tumut, and in the evening of that day it is intended that a tea and public meeting in connection with the Anglican Church shall be held.

1934 - DR. BURGMANN AT TUMUT. - TUMUT, Monday. - The Right Rev. Dr. Burgmann, Anglican Bishop of Goulburn, and Mrs. Burgmann, have just completed a five-days' visit to Tumut. Dr. Burgmann was tendered a civic reception. Services were held at Tumut, Gilmore, Blowering, and Toomooroma, and nearly 100 candidates were confirmed at the various centres. The Bishop spoke at the flag ceremony in Tumut Intermediate High School, and conducted a children's service at church. Dr. Burgmann's visit was a fitting termination to All Saints' Church Golden Jubilee Celebrations. - (Ref- The Sydney Morning Herald (NSW : 1842 - 1954)(about) Previous issue Tuesday 13 November 1934).


To Churches Index - To Blowering Index