Photo of Ray's second property, formally owned by The Sullivans 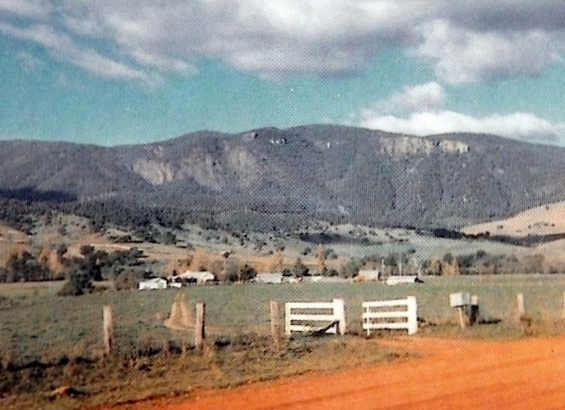 In the Methodist Church, Tumut, which was nicely decorated for the occasion by the bride's young lady friends, the marriage was celebrated on Wednesday last, by Rev. Chas. Wheeler, of Miss Nelly May, third daughter of Mr. and Mrs. Fred. L. Weedon, 'Ranji,' Russell-st, Tumut, with Mr. Raymond Rolf, eldest son of Mr. and Mrs. George A. Johnson, of Fitzroy-st, Tumut.

As the bride entered the church on the arm of her father and proceeded up the aisle to the altar, the choir sang 'The Voice that Breathed o'er Eden,' and while the register was being signed the organist, Mr. Keith Weeden (brother of the bride), played the Wedding March. The bride was becomiNG attired in crepe-de-chene and georette, wreath and veil, and carried a pretty bouquet of lilies, carnations, bebe roses and asparagus fern.

She was attended by her sister, Miss Stella Weeden, as bridesmaid, gowned in salmon crepe-de-chene and georgette. Mr. Alf. Johnson (bridegroom's brother) was best man.

At the conclusion of the ceremony the bridal party partook of a sumptuous breakfast at the residence of the bride's parents, Rev. Chas. Wheeler occupying the chair, and the usual toast list was honored.

A splendid array of wedding presents, good and useful, was displayed on a side table, and amongst them were a number of cheques.

The bride and bridegroom motored to Gundagai, catching the outgoing train for Sydney, where the honeymoon is being spent, the bride travelling in a navy georgette costume.

The young couple's future home will be at Blowering. - (Ref-

CHILDREN born to George Alfred (1st) and Jane were:

On Nov. 22 at the residence of Mr. and Mrs. G. A. Johnson, West Blowering, their second daughter, Miss Bertha Flotonoe, was married to Mr. Alfred Augustus, son of Mr. and Mrs. I G. Lefevre, of Tumut Plains,

After the wedding all gathered round the breakfast table, which was prettily decorated and attended to by girl friends of the bride. After full justice had been done to the good things provided, the Chairman Mr. 0. E. Burgess wished Mr. and Mrs. A, A. Lefevre all good luck. The bride groom responded and thanked all for their kindness and good wishes. Appreciative speeches were also delivered by Messrs L. Vickery, S. Denton, G. A. Johnson and B. B.Johnson.

The bride's dress was of soft white muslin, insertion and lace trimmings, with overdue of shadow lace. The brides maid was prettily attired, and carried a basket of forget-me-nots and the lily of the valley, and received from the bridegroom a nice gold bangle.

Mr. and Mrs Lefevre immediately left to catch the train for Sydney. The bride's travelling dress was of mole I orepe-de-chene, with pale blue crepe de-chene and white lace trimmings and hat to matoh. - (Ref- Adelong and Tumut Express and Tumbarumba Post (NSW : 1900 - 1925)(about) Previous issue Friday 8 December 1916 Page 3).

West Blowering, all via Tumut, NSW

SCHOOL: Unknown to the writer at this point.

In 1921 at the time of his marriage to Miss Nellie Weeden, Raymond was working on his parents property known as "Linden" a dairy and cropping farm, which fronted onto the Tumut River.

Later this property was sold to a Neighbour Mr Leo Myers, who quickly on sold it to his brother Mr Colin Myers. Colin farmed it till the resumption in about 1966.

Raymond & Nellie then purchased another property about a mile north.

On every side the genial smile of the dairyman is most noticeable. We are sorry to hear that some, through lack of energy and management, have decided to give up the dairying industry.

It now remains for men like Mr G.A. Johnson to prove the value and utility of that industry. He has gone in for things on right lines and deserves great credit for his forceful display of energy as well as the laying out of capital, which will soon repay him with splendid returns as well as making his dairy an ideal one. He has wire-netted his property to combat the attacks of rabbits, which prove a serious menace to the dairyman. He has now installed a powerful hydraulic ram, whereby water is forced from the creek right up to his dairy sheds. Later on, he intends running a pierced pipe along the top of the dairy to provide a cooling spray in summer. The premises are spotlessly clean and he has also all the latest improved machinery, including steam power. He is also cultivating lucern to supply his herd with winter feed. We all wish him success in this great industry.

Mr & Mrs G A Johnson, who have just left Blowering to reside in Tumut, were entertained by the residents at an afternoon tea on Wednesday week last in the school grounds, kindly lent by the teacher, Mr Minchin.

After refreshments had been partaken of, the Chairman (Mr J T Wilkinson), in an felicitous speech, expressed his pleasure at presiding at such a function. He would like some of those present to support him also.

M J Halloran was not altogether sorry for Mr Johnson's departure, as he was now in a position to take things easier. His life at Blowering was a most industrious one, and his family were very hard working. He was following in the footsteps of Mrs Denning and Mr Thompson Myers.

Messrs Frank Halloran and B Hayden also endorsed the remarks of previous speakers, while Mr F J Bourke made the presentation of a silver cake-basket inscribed; " To Mr and Mrs G A Johnson, with best wishes from their Blowering friends".

The funeral took place on Sunday, interment being made in the C of E portion of the Tumut Cemetery. Further reference will be made in our next issue.

...death of George Alfred Johnson of "Mona Bank" , Newtown, Tumut on 3 January. He is a son of the late George Johnson who settled in the district in 1850. Deceased was born in 1858 at Tumut Plains and was brought up at Blowering. In 1881 he purchased a little farm at Blowering Bridge which he later sold, and moved to a fine holding at West Blowering. This he also sold about twelve months ago and came to live in Tumut with his sons.

He was married in 1885 to a daughter of Thomas Eggleton. They had four sons and three daughters as follows -

One brother Jack survives him and two brothers Nap (Napoleon) and William predeceased him. (Ref-

The death occured suddenly on December 27, at 10 am of Mr George Alfred Johnson, a well known retired farmer and dairyman of West Blowering and latterly of Tumut, at the age of 67 years. Deceased was a native of the district, being a son of the late Geo. A. Johnson, in whose footsteps in vocation he followed. Some two years ago he retired from active work, and with his wife and some of the family came to Tumut to live.

A year and a half later he had a heart seizure and for a fortnight, was a patient in the Tumut Hospital under a successful treatment of Dr Browne. Three months afterwards and up to the time of his death, he had periodic attacks of the same trouble. Rising on the morning of the 27th December he ate his breakfast, and not feeling well lay down on the bed again. When Mrs Johnson went into the room she noticed that his breathing was faint and before medical aid could be summoned he expired. Deceased was a successful farmer and was in recent years ably assisted by his sons.

When he gave up farming the young men carried on the work, until Edward, Alfred and Archie purchased the bakery business of Mr R.J. Turnbull, trading under the name of Johnson Brothers. Edward eventually taking over the concern. When selling out to Mr H.E. Ash, Mr and Mrs Johnson and the sons and Miss Doris took Mr and Mrs Henry Wilkinson's town residence while they were spending their Christmas holidays on the station at Yellowin, and it was there that deceased died.

A sorrowing widow, four sons (Ray, Edward, Alfred and Archie), and three daughters, viz: May (Mrs H.E. Foster of Armidale), Bertha (Mrs A. Le Fevre of Tumut Plains) and Miss Doris of Tumut, mourn the loss of a devoted husband and affectionate father.

Mr Jack Johnson of Blowering is the only surviving brother, his two other brothers, N.B. and William, predeceased him.

A fire was reported yesterday at Mr Ray Johnson's residence, West Blowering. At about 2 pm Mr & Mrs Johnson were away in a paddock Mr Kevin McKey observed smoke issuing from the back part of the laundry and kitchen and gave the alarm but before he got to the scene the detached part of the building was well ablaze and nothing was saved from it. all the kitchen ware and utensils being destroyed. With assistance from Neighbours the front rooms were saved although considerably damaged. The building and contents were insured.

~NEXT GENERATION OF CUSTODIANS~
MARRIAGE for George (3rd) JOHNSON, in Tumut

"Linden", West Blowering, with his parents - (Later sold to Colin Myers by his father) - Colin then renamed the property "The Ranch"

West Blowering - on property formally owned by the Sullivans.

Sale of West Blowering Estate. A large representative crowd assembled at O'Brien's Hall, Tumut, when the firms of Weaver and Perry (Sydney) and S. F. Wilkinson and Co. (Tumut), auctioneers in conjunction, offered, on behalf of the London Chartered Bank, the property known as West Blowering Station on the Tumut River, subdivided into 13 farms, ranging in area from uu ucies to o,z^u acres. Mr. Weaver feeling somewhat in disposed, Mr. S. F. Wlkinson wielded the hammer, with the results as follows: —

Lot 6, known as West Blowering Home stead, of 1671/2 acres, freehold, started at Ł8, and was passed in at Ł10; but was subsequently bought privately by Mr. Thompson Myers (late of Gocup) for Ł12 per acre.

JOHNSON - Males - Marriages in relation to the Blowering Valley to 1966.