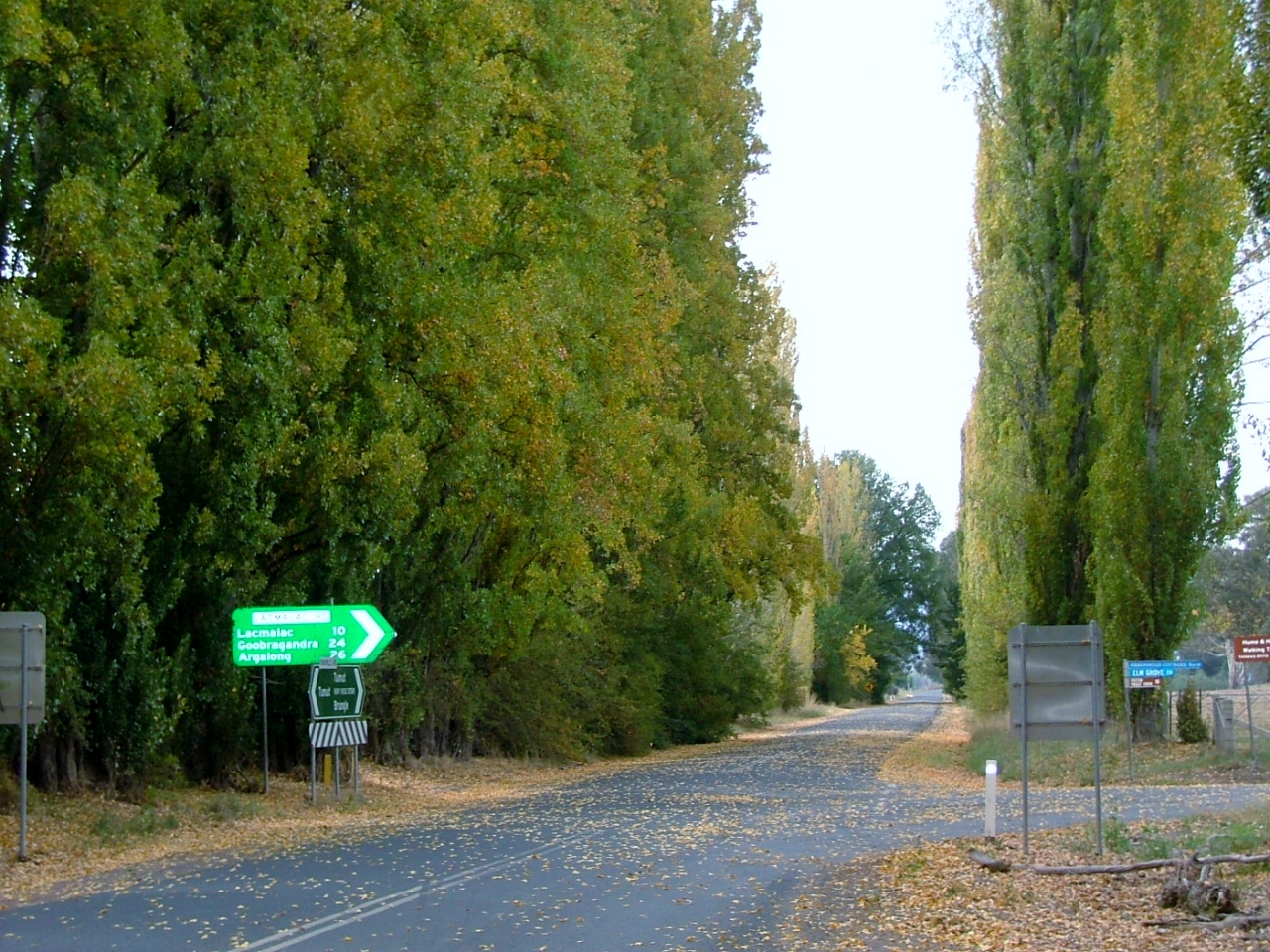 The turn off to Lacmalac

Pleople named as living in the Lacmalac Area in 1872 - Reference - Greville's 1872 Directory).

1788 - During the storm on Friday a stringy bark tree in Mr. Alexander Piper's paddock, was struck by the lightning and set on fire. Three miles from this spot on the Bombowlee Creek, the electric fluid kindled another tree and burnt several acres of grass. On the same evening four persons on their way home to Lacmalac had a most providential escape from being killed. The party consisted of Mr. George Morton and two others who were travelling in a spring-cart, and Mr Robert Gordon who was following on horseback. When about two miles from Tumut a huge tree growing by the wayside was shivered by the lightning and a heavy limb fell across the road between the cart and the horseman completely blocking up the roadway, and where only a moment before the vechicle with its passengers was passing. Mr. Gordon was considerably startled by the ocurrence, as his first thought was that his friends in front were crushed by the fallen timber, but when he comprehended the scene he thanked God for their deliverance. = (Ref- The Sydney Morning Herald (NSW : 1842 - 1954) Thursday 7 February 1878).

1891 - IN THň SUPREME COURT OF NEW SOUTH WALES - PROBATE JURISDICTION.- In the Goods, Chattels Credit, and the fleets of MARY ANN SOPHIA BUCKLEY late of Lacmalac, in the colony aforesaid wife of William Buckey Deceased, Intestate APPLICATION will be made after fourteen days from the publication hereof that Administration of the Estate of the abovenamed deceased may be granted to WILLIAM BUCKLEY, widower of the said deceased - IBANK TAYIOR, Proctor for the Administrator,Tumut - The Sydney Morning Herald (NSW : 1842 - 1954)(about) Previous issue Monday 29 June 1891). and

1880 - THE following particulars are given in the Gundagai Times of the death of young Stephen Halloran, biŪplly telegraphed on Tuesday :-" A very melancholy event happened at Lacmalac, Tumut, on Saturday afternoon. A young lad named Stephen Halloran was shot dead bv a companion named William Robert Trossider.

The two youths were often together, and on Saturday afternoon one of the minors heard them shouting and amusing themselves in the house at the claim. John Johnson, one of the tributers, was coming from his work when he heard the report of a gun, and immediately after he met young Trossider deadly pale and trembling like a leaf.

In a few minutes he made Mr Johnson understand that he picked up his gun, and beleaving it was not loaded he in a moment of thoughtlessness held the muzzle quite close to Halloran's head and pulled the trigger. The boy fell dead.

The grief of deceased's mother, who was soon on the spot, can be better imagined than described.

The father was away at Blowering at the time. Johnson rode into town and reported the matter to the Police magistrate, and Sergeant Zoellner accompanied him back to Lacmalac.

1936 - A wedding of interest in the Tumut district was celebrated recently when Miss Bonney Teece Kell, only daughter of Mr. and Mrs.Stanley A Bundock-Kell, of Lacmalac, Tumut, was married at All Saints' Church of England, Tumut, to Mr.Thomas Lancelot (Peter) Wilkinson, eldest son of Mr. Thomas Wilkinson, of Springfield, Tumut.

Both bride and bridegroom belong to pioneering families of the district. A frock of white self-spotted crinkle organdie was worn by the bride, and her veil had been worn by the late Mrs. Charles Bundock at her wedding sixty years ago. The Misses Betty Holloway (cousin) and Audrey Morris, who were bridesmaids, wore blue organdie stitched with silver, with matching hats trimmed with flowers. Mr. W. McLeod was best man, and Mr. John Wilkinson (brother) groomsman.

While Thomas Harris was syphoning petrol from a motor car at Lacmalac and transferring it to a tractor the spirit was ignited by the flame of a hurricane lamp. There was an explosion which enveloped Harris in flames, and he was severely burned. - (Ref- Barrier Miner (Broken Hill, NSW : 1888 - 1954) Saturday 21 January 1939).

The herd has a strong influence of Dudgeon blood and are heavy producťrs. Most have been treated with Strain 19 Complete dairy and farming Plant 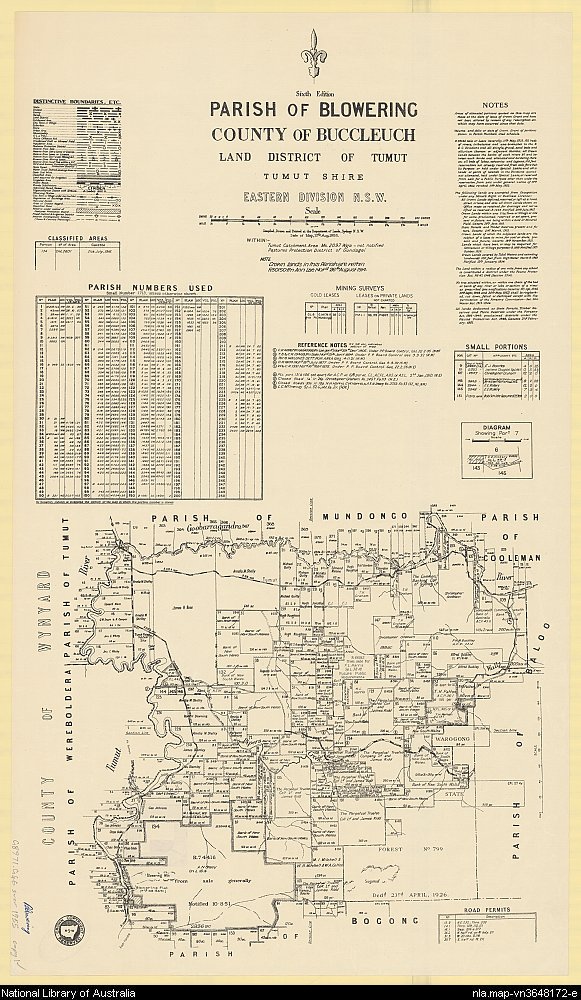 1929 - LACMALAC SETTLERS. - MINISTER'S CONCESSIONS. - On Thursday, October 24, Mr. Hoad, M.L.A., moved the adjournment of the House to discuss the position of soldier settle;, at Lacmalac. He complained that if the action threatened by the Lands Department was I taken it would force many of the men to abandon their holdings.

Referring to this subject yesterday the Minister for Lands (Mr. Ball) pointed out that the settlers on Lacmalac Estate entered into an agreement with the vendor to purchase it at £15 an acre under the provisions of the Closer Settlement Promotion Act. The department was then approached to finance the purchase for the particular soldier settlers. After negotiations the property was purchased by the department for £13/19/, or a reduction of a guinea an acre on the price agreed to by the settlers, to which extent they benefited. The property comprised rich alluvial flats, 3 to 7 miles from Tumut, with frontages to the Goobarragandra River.

The nine men who entered into the contract to purchase went into occupation in 1920. Three of them are not now using their farms personally, but are either leasing or share farming them, one only with the consent of the department. Five of them have paid the department less than £25 each since they went into occupation, and one less than £55. The remaining three have paid respectively £452, £440, and £435.

The properties that are leased are for rents exceeding the ordinary annual dues to the department, and if a lessee can pay the rents, the Minister considers, the settlers could surely have paid them. Of the three settlers not using their farms personally only the one who is leasing with consent is paying any proportion of the money received to the department. Concessions averaging £435 a settler have already been made. Mr. Ball added he was sure that it would be agreed the department had been most sympathetic in dealing with these men. - (Ref- The Sydney Morning Herald (NSW : 1842 - 1954) Thursday 7 November 1929).

1929 - LACMALAC SOLDIER SETTLERS. - Replying to statements made by the Minister for Lands (Mr. Ball) indicating the concessions made to the settlers on Lacmalac, a long letter has been received from Mr. M. R. Archer, president of the Tumut sub-branch of the R S and S IL A , on behalf of the Lacmalac soldier settlers This states (in part) -

(1) It Is pointed out that none of the settlers entered into any agreement with the vendor for the purchase of his land at £15 per acre because this property had been already earmarked by the then Director of Soldier Settlement (Mr Bryant) as a group settlement ostensibly for tobacco culture. Later lndividual applications were made to purchase the farms comprised in the settlement the applicants had no knowledge of the purchase price nor of the individual valuations made by the department until the farms were gazetted - therefore as no price was agreed to by the applicants there could be no saving as suggested of the original applicants three withdrew and other applicants had to be found for the vacant farms by tho vendors agent. 0

(2) The statement which says the proposition comprises rich alluvial flats makes it appear that the total areas are of this nature As a fair estimate about B per cent of this estite could be termed rich alluvial flats about 19 per cent second rate cultivation land and the balance from good grating to good forest lands. It must be remembered further that when the settlers went into occupation of this propertj-these rich flats and a great proportion of the forest country were thickly covered with briars to remove which and to keep them in check has cost the settler anything from £1 on the higher lands and £3 on the flats per acre.

(3) These farms nore not gazetted till December 20 1920 and while some of the settlers by the consent of the vendor were in occupation a while befor to this others did not go into occupation until late In 1921. The published statement makes, it appear as though 1920 was a full years occupation.

(4) With reference to the Individual payments made to the department se thom lu this was a private matter between the Individual and the department Still settlers cannot rcconc le tHe amounts with payments made, for nhlch no c-cdlt has been gl\en-and no credit whatever has been given the settlers for the vilue of improveme its put on them over which the department holds full security These Improvements are at least double the settlers Indebtedness to the department As the Minister haę given such Mde publicity to our private affairs we ask that he publish the special report made by the District Surveyor as It applies to the value of the improvements on the farm

(5) Regarding rent paid by lessees in excess of amounts due to the department it Is remarkable that the Minister does not recognise that the Improvements effected by the settler have made it possible to make the farms rent producing and the margin paid by the tenants in excess of instalments will not permit of a return of 1 per cent on the improvements effected and the capital invested without taking into consideratios five years of war and eight years of worry. The further statement that only one of the settlers leasing his farm is paying any proportion of the rent is also incorrect. Referring to concessions spoken of by the Minister it is admitted that amounts nee waived This ne understood was made possible by a grant from the Federal Government aided by the Soldiers Settlement Amcndlnt, Bill framed by Mr P Loughlin Minister for Lands at the time this bill gave the Minister power to dcil with and grant concertons to individual settlers on the merits of his case. Since that time no concessions have been made with the exception perhaps of a postponement of rent on which interest is charged so we cannot recognise the concessions mentioned by the present Minister Regarding the special reference to an Individual settler this could mean any one of the nine settlers concerned and without making riglt inquiries into the matter, v.e have reason to believe this statement is grossly exaggerated and untrue and its publication more than anything else has been most dimarlng to the settlers and has already caused coniderable embarrassment to them and their families and the settlers intend to go further with this matter. In conclusion v.c wish to stress the fact that the settlers pin most of the Improvements on from the limited returns from the farms The land stock plant building material fencing and all necessities had to be purchased at indicated prices and within a very short time primary promues I fell approximately two thirds in value while dairy cattle fell at least two thirds below the purchase price. - (Ref- The Sydney Morning Herald (NSW : 1842 - 1954) Wednesday 27 November 1929).