Date of selection with Portions and Acres plus money in Pounds outstanding payments:

1871 - On Monday leavinging at an early hour his Excellency started for Kiandra, accompanied by a large party of gentlemen, breakfasting at the residence of Mr E G Brown, at Blowering, which is about ten miles from Tumut, on the way to Kiandra. 1 understand his Excellency expressed himself as highly pleased with the district, and with the hearty reception he has received over where he has been met with. 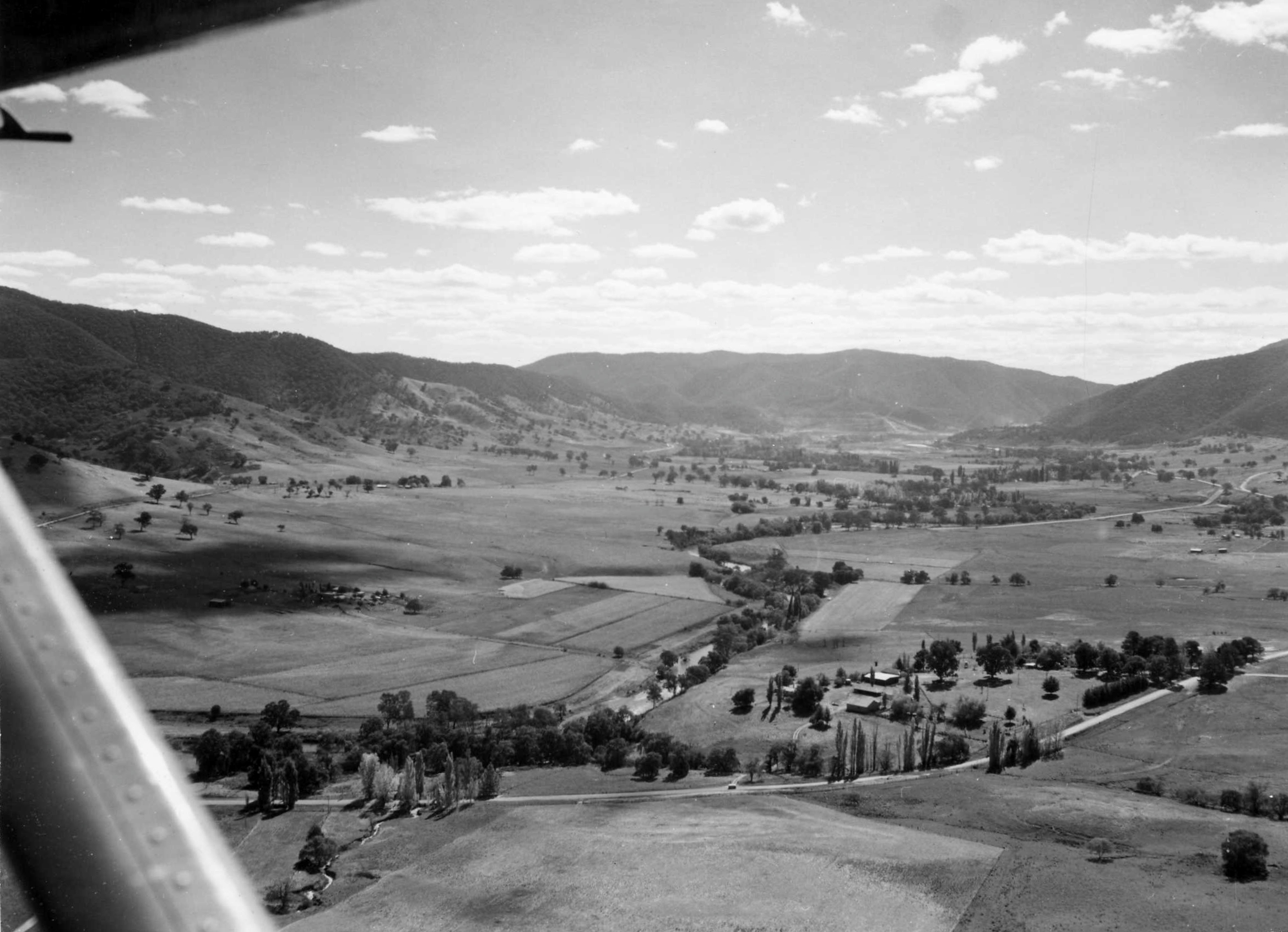 Joseph was born in c1846 Bradford in Yorkshire, England. His father was George Lambert of Netherdill, Yorkshire and his mother was Jane Butterfield of Bradford, Yorkshire. They arrived in Port Phillip, Melbourne on the 19th July,1848 on board the Palmyra - (Ref - http://members.iinet.net.au/~perthdps/shipping/mig-vic.htm) with (2) year old son Joseph Augustus Lambert, as FREE SETTLERS. (Ref Diana Diluca)

well known as the property of the late Joseph Lambert, is the latest announced property for sub-division for closet settlement. It will be put up to auction at Tumut on November 1. Areas 479 acres freehold, 6,228 acres G. P. and about 18,000 acres pastrol holding are included in the estate, which is situated 12 miles from Tumut with frontage to Tumut River. Messrs Trebeok, Sons & Co. (Sydney), S. F. Wilkinson & Go and Bland Clayton & Son (Tumut), McEvoy & Co. (Mel bourne) are the auctioneers, and Messrs Taylor and Tartakover Tumut Morgan and Morgan (Cootamundra] are the solicitors. - (Ref- Adelong and Tumut Express and Tumbarumba Post (NSW : 1900 - 1925)(about) Previous issue Friday 28 September 1906 Page 3).

Arrived 19 July 1848, with Captain John Robertson as it's master, it weighed 602 tons, it was a barque and sailed from Plymouth, England to Port Phillip, Melbourne, Australia. The ships Surgeon was Superintendent Alex Russell who assisted emigrant passengers, 5 babies were born, and only 6 deaths occured, being 1 adult and 5 children.

Records indicate that Joseph Lambert at the age of about 16 years worked on the Adelong Station for Mr Thomas Hill Bardwell (these two families were to become united through marriage of Joseph's daughter Alice and Thomas's son Charles). After a time he moved onto work ............Then in about 1872 Joseph purchased the Blowering Station from Mr E G Brown.

The show was crowded again to-day. Visitors came from all the surrounding districts. There was a splendid lot of exhibits in the horse section. In blood horses, Henry Butler, Robert Downing, F. H. Guy, Angus Rankin. Charles Baker, D. F. Robertson, James Simmers, and Thomas Mulvihill, carried off the chief honours. In draughts, W. H. Hargreaves, G. Wilkinson, J. Wilkinson, J. Oregon, Brown, and Harris won first honours. Tho cattle section was not so numerously filled as anticipated, as the Wantabadgery cattle were prevented from coming on account of serious bush fires which were raging on the run.

In Durhams, .Thoms Robinson, of Kimo, carried off the palm ;

in Herefords, Joseph Lambert, of Blowering.

There were larger entries of sheep than usual. Laurence Brennan and F.H. Guy were the principal prize - takers.

There was a good show of native birds and poultry. George Kater Groon, of Tumut, showed a grand collection.

situated 12 miles from the town of Tumut, and has a frontage to the Tumut River.

The whole of the land is highly improved, fenced and sub divided, all sheep proof. 'The land is suitable for cattle and sheep, -and the rich river flats are invaluable for agriculture, and can be leased at high rents for maize and tobacco. There, is a comfortable residence, woolshed, stable, i.e., erected on the land.

The auctioneer would remind intending purchasers that there is almost a certainty of the railway being extended from Gundagai to Tumut, which will greatly enhance the value of all properties in the district, and would invite inspection before the day of sale. .

Possession can be given at offer.

Terms-Half cash, and balance at one and two years, bearing interest at the rate of 7 per cent.

East Blowering Estate, well-known as the property of the late Joseph Lambert, is the latest announced property for sub-division for closet settlement. It will be put up to auction in Tumut on November 1

The East Blowering Estate, of 20,000 acres, 12 miles from Tumut, was offered by public auction, at O'Brien's Hotel, on Thursday last, under instructions from the administrators of the estate if the late Joseph Lambert.

No bid was obtained for the property, which was passed in for private treaty.

The Three MARRIAGES of Joseph Augustus Lambert are;

In 1866 - 1st child born during 1st marriage was Alice Victoria LAMBERT, parents Joseph A & Miriam in Wagga Wagga, NSW - (Ref NSW BDM No.15668) In 1889 Alice V married Mr Charles Darby BARDWELL in Tumut, NSW - (Ref NSW BDM No.7112). Charles being the son of Thomas Bardwell owner of "Adelong Station" Charles and Alice went on and produced five children, see their own page. Records indicate that Alice Victoria was about 36 years of age at the time of her fathers death.

In 1873 only about 7 years after her marriage Miriam LAMBERT, daughter of Mr & Mrs Josiah & Rosina GREGSWELL died in WAGGA WAGGA, NSW - (Ref NSW BDM No.7162) after complications during child birth.

Isabella second marriage for Joseph A;

Children born from his second marriage were

2nd child from 2nd marriage was - 1882 Donald Lambert, parents JOSEPH A & ISABELLA was born in Tumut,NSW - (Ref NSW BDM No.28534)In 1904 he married Miss Sarah A BUTTERFIELD, in Wagga Wagga,NSW - (Ref NSW BDM N0.2317) There are two children of this marriage listed on their own page

3rd child born from the 2nd marriage was On the 15th December,1884 Cecil Lambert parents Joseph A & Isabella was born in Tumut,NSW - (Ref NSW BDM No. 32593) for his details see his own page.

6th child of the 2nd marriage was - 1889 Violet I Lambert (1st) parents JOSEPH A & ISABELLA was born in Tumut, NSW - (Ref NSW BDM No.35066). In 1910 she married Donald R E Stockwell in Adelong, NSW - (Ref NSW BDM No.11184). The NSW BDM show three children were born with Violet Stockwell as the mother and various spellings for the fathers first name.

Third marrage for Joseph A;

1st child of the 3rd marriage was In 1902 Grantly Lambert, parents Joseph A & Jane was born in Tumut, NSW (Ref BDM NSW No. 26945) - Only about 10 months old when his father was killed on the Blowering Station property in an accident involving a horse. Grantly died in 1924.

DEATH of Joseph A Lambert

At the age of about 57 years Joseph A died on the 11th January, 1903 at Blowering Station following an accident involving a horse. Unfortuantely he died "INTESTATE". There are pages of official papers in relation to this matter that will be transcribed in due course. The property was then in the names: Jane Lambert & George Francis Lambert,(1st son) and J G Ware, of the UK after Joseph's death in 1903, George being the first son in the first marriage of Joseph and Miriam Lambert.

Portions Listed in his Estate.

The whole of the land is securely fenced, rung and subdivided. Some 200 acres have been cleared.

Other MARRIAGES of Males in Tumut with name LAMBERT from 1788 to 1956.

Other MARRIAGES of Females in Tumut with name LAMBERT from 1788 to 1956.

The property was sold to Mr Charles Badgery who became the fifth owner of "Blowering Station".

Births for the last name Lambert in the years 1788 to 1910 registered in the District of Tumut.