He brought the propert from Killen & Armstrong

- The sale is reported of Messrs. Killen and Armstrong's East Blowering Station of 6000 acres, together with land, homestead, buildings, and other improvements to Mr. O. M. Lodge, of Mona Vale. This station is well known for producing some of the best stock in the district. - (Ref- The Land (Sydney, NSW : 1911 - 1954)(about) Previous issue Friday 26 April 1935 Page 31). 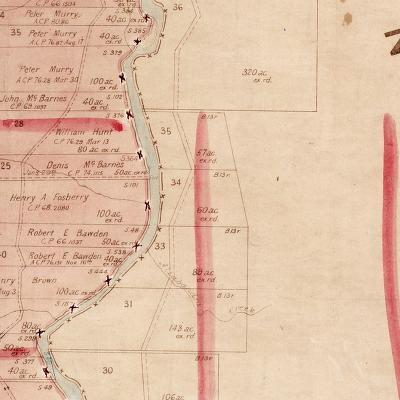 Were the last owners of "Blowering Station" which was resumed in about 1966 by the NSW State Government through the W.C. & I. C.
BIRTH

Both Oliver Lodge and Honnor Mitchell were very keen snow skiers and it was whilst they were travelling on board the German Cargo ship "Neckar" in 1933 they became engaged and in July, 1934 they married in Woollahra, Sydney. NSW - (Ref NSW BDM No.13620).

One child a daughter Suzanne was born on October 1935.

WORKERS on the property.

Mr Bill Moorhead, who also worked on Talbingo Station over the years.

In the 1950's Noel Robinson, cattle worker and General Hand - Noel loved horses and the out door life style. He competed in local Rodeos. Noel was a good mate of Gerry Crain's of "Fairview", West Blowering, in fact was bestman at Gerry and Kath's wedding.

In the late 1940' and early 1950's Bob Beattie,was the Station Rabbitor, he had about 30 dogs and a few hundred traps.As a young boy living on "Poplar Farm" Neil Hartshorn remembers old Bob and his dogs doing a great job with the then rabbit problem. (Ref Neil Hartshorn, Tumut).

In the 1950's and 1960's Charlie Hilton of Bondi, Sydney often travelled to visit his brother-in-law Syd and Jean Stephenson of "Kinloch" West Blowering. And regularly did house painting for Mr & Mrs Lodge at the station home stead during his visits. He would swim across the river or use a canoe in the winter and travel by a station hand's vehicle to the Station residence. - (Ref John Stephenson)

In the 1960's Miss Janette Bridle of Talbingo was Mrs Lodge's House Maid.

Aboriginal cricketer Johnny Taylor who died of measles in 1875, had worked as a stockman at Blowering.

Next of Kin LODGE, HONNOR

y Our Special Representative. FORTY-TWO landholders in the Tumut Valley are faced with the loss of their farms when the valley is inundated as part of the Snowy River Hydro Electric scheme.

Some of the families affected have had their holdings for upwards of 120 years. Tragic aspect of the inundation is that it will obliterate one of the State's loveliest and most fertile valleys.

"Blowering," property of Mr. Oliver Lodge, and one of the best known Romney Marsh studs in Australia, will be among the properties affected.

Seen recently by "The Land," Mr. Lodge said that while the wisdomo of building the chain of clams in the area was not questioned, the fact that landholders could get no information whatever regarding their possible tenure, imposed incalculable hardship, since it brought to a standstill all long-term improvements and operations necessary to the healthy maintenance of any farm property.

Blowering was purchased by its present owner in 1935, but the Romney stud had already been established some years before on Chatsbury blood. Mr. Lodge's first purchase on acquisition of the stud was from New Zealand, when he imported 12 ewes and a ram from Leedstown. Since then he has imported 18 rams, mainly from Leedstown. Inter-State Demand Mr. Lodge is unique in that he has never shown at either Melbourne or Sydney Royal Shows. Entire output of rams offered from Blowering are sold in West Australia, South Australia, and Tasmania. This year's complete offering has already been sold.

TYPICAL of tho type of owe produced on Blowering Romney Marsh Stud is "Sunshine Suzy," bred in 1946 on the property. Recently, Mr. Lodge purchased a group of heifers from Lake Midgeon, Which will form the nucleus of a small Hereford stud.

As well as the Romney stud and his fine Hereford herd, Mr. Lodge uses the lower end of his property to run a quality Jersey herd and a piggery.

These projects are run on a share basis, and so successfully and efficiently that the dairy is used for demonstration work and students from Yanco Farm do their dairy course on the property. Bulls bred by the Department of Agriculture are used exclusively, and herd testing and recording are scrupulously carried out.

All crops for the dairy and stud are grown on the rich river flats fronting the Tumut River, which winds most picturesquely through the property. A crop of maize seen recently by "The Land" made a deep splash of green on the landscape, bordered on one side by the road and on the other by the willow-fringed river. In an adjacent 11-acre paddock the dairy cows were depastured in an even more brilliantly green patch on land planted last year with a mix ture of grasses and clovers.

Mr Lodge has carried out a progressive programme of improvement each year the war years, when he was away on active service, excepted.

Of the 5,000 acres, he has sold 900 acres in recent years to two returned men, the Vickery brothers. This is: Jaigely hilly country on which sheep and cattle are being run.

STUD ewes from Blowering Romney Marsh Stud crossing Bloworing Creek, which runs through the properly to join ihe Tumut River. Picturcsquo nature of tho country can bo gathered Irom the picture. Of the remaining- 4,100 acres, more than 2,000 acres have been improved by supering and sowing down with improved pastures, mostly clovers, rye and phalaris.

Between 80 to 110 tons of super, are laid each year and this, with top dressing, has had a most stimulating effect.

Mr. Lodge said that the country was most responsive to improvement and everything he has done had shown splendid returns for the labor and expense involved.

The country at Blowering, lying as it does in the heart of the valley, comprises rich river flats and steep, grassed foothills lightly timbered and leading to towering, heavily timbered mountain country. Indication of the capacity of the land to respond to improvement, Mr. Lodge pointed out two adjoining paddocks, comprising 300 acres, showing a thick sward of pasture, which, since June last, have carried 800 sheep and 120 head of cattle. The land had been supered at the rate of 3 cwt. to the acre.

Adjoining paddocks, not treated with super, and carrying no stock, showed a much thinner coverage of pasture.

Looking from the flats to the hillsides, the "super line" was cearly discernible, all country treated being a deeper green than the untreated land.

Method used on one hill slope, known as Paradise Hill, has been to remove with shovels some 22 tons of soil from the crest, and shovel it down the hilly slopes as top-dressing over a dressing of superphosphate. That it had been effective was shown by, the rich response of the grass,

Gully erosion on these steep hill sides is treated by the method of rounding all the head of the gully, then laying wire netting and sodding over it with paspalum. Gullies treated in this manner had made no further movement and were rapidly filling and covering. Since the war's end new buildings on Blowering have included new shearers' quarters, show preparation quarters for stud sheep, with pen accommodation for a full team; new combined shearing quarters and machinery shedding, and a new cot tage for a permanent, rabbiter. These buildings represent many thousands of pounds of expenditure, the ln.st-ereeted costing almost three times the amount of the first, owing to rising costs of labor and materials, The original Blowering homestead, more than 100 years old, and built of slab and iron, stands modestly in the midst of these costly structures, mute monument to the pioneer settler of this lovely property, who probably built it with his own hands and for the cost of the few sheets of iron on the roof.

Lovely Homestead One of the heartbreaks of leaving Blowering will be, to Mr. and Mrs Lodge, abandoning the lovely homestead which they have evolved out of the spacious but rather unbeautiful brick cottage, sheltered by giant acacias, elms and oak trees. Outside lines of the house have been softened by vines and climbing roses, and pergolas, strategically placed, lend shade and provide comfortable shelter.

A huge plate-glass window, let into one side of the sitting room, gives a view of the road beyond the garden. The inside reflects the exquisite taste of Mrs. Lodge, both in decor, and furniture. Walls of the old rooms have been recessed to provide book and ornament niches and colored in cool pastel shades, with Persian rugs enhance the beauty of plain waxed floors and original period pieces of furniture. All mod cons in kitchen and servery have reduced any climatic discomforts to a minimum. n. . Blowering- Itomncy Marsli Stim may find another home, but it is certain that money can never replace the lovely Blowering of the Tumut Valley. - (Ref- The Land (Sydney, NSW : 1911 - 1954) (about) Previous issue Friday 27 January 1950 Page )

To Blowering Station - To East Blowering - To Front page