HUME AND HOVELL'S WALK TO MELBOURNE AND BACK

...........Hovell’s journal mentions that they caught a lobster in the river and shot a kangaroo, and planted clover seed, and peach stones.

On November 2nd they crossed the Goobragandra, and set out over the hills in a south-westerly direction, behind the “Camelot” and “Wermatong” of our day, and towards evening “we came in sight of some small plains to the westward of us and a large river” states Hovell’s journal.

The point where they emerged from the hills would be about where the new road comes into sight of the Tumut River near Bourke’s at Blowering.

Hovell’s journal continues, “Here we saw that it was only lately that the natives had passed up the river in the direction we were going, and by the marks which they made in trees they had iron, as well as stone, tomahawks in their possession”.

The exploration Party went 2 miles up stream and camped.

On Wednesday , November 3rd 1824, the party started at sunrise, and made towards the river, and after going three miles came “to the banks of a river which was running very strong, equal to any of the others we have passed, it was about 80 feet wide and three of four feet deep over the falls”.

They tried to cross but found the river too deep, and returned 1Ľ miles down stream “We found the place where the natives had crossed only a few days before”. (This spot is now known as Janey’s Reserve).

“Here the river is at least 150 feet wide, the stream very strong, stony bottom, about 2˝ feet deep, the falls being a little below us.

We crossed with the loads on the beasts’ backs a little after sundown, and encamped for the night on the west bank”......... - DISCOVERY AND EARLY HISTORY OF TUMUT VALLEY An address to Canberra & District Historical Society by REV’D. J.D. FRENCH... 1963). 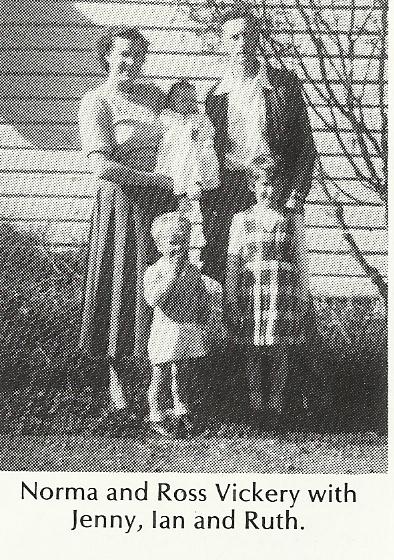 Both photos from "Blowering" book. 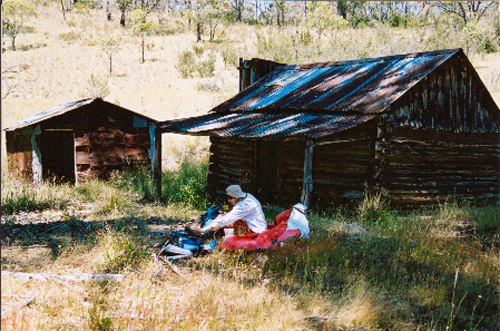 Vickerys is in the west of KNP, on Jounama Creek, up towards Talbingo and accessible from an un-marked firetrail off the Snowy Mountains Highway. After walking in about 500m, note a newer firetrail heading off to the left, down into a gully - this goes directly to the hut, over a hill. Photo: Olaf Moon, 2002

The old walk along Jounama Ck is possible, but becoming incrasingly rough due to the blackberries. Grid reference 271571 (note DIFFERENT to the KHA list). A GPS Location is available. Also known as Mackerys.

The site was previously occupied in the early 1900's and used for breeding horses and potato growing.

The huts were built in 1938 by Ross and Noel Vickery for sheep and cattle grazing. The shed (standing in good condition) was built in 1940.

The front door came from the Wynyard Hotel in Tumut, and remains a crouch to get through!.

The hut is one of two in the Park, featuring interlocking log construction. The roof is of iron and the floor of wood. The chimney is also of iron.

The construction of the shed is interesting, as it is made largely from flattened kerosene tins. - Reference •KHA reference number is 0702 •KNP POM is L.3. •There is a history brief and Conservation Study available for this site. - Profile updated 3rd October 2012. - (Ref - http://khuts.org/joomla25/index.php/the-huts-v2-5/knp-v2-5/436-vickerys-hut).