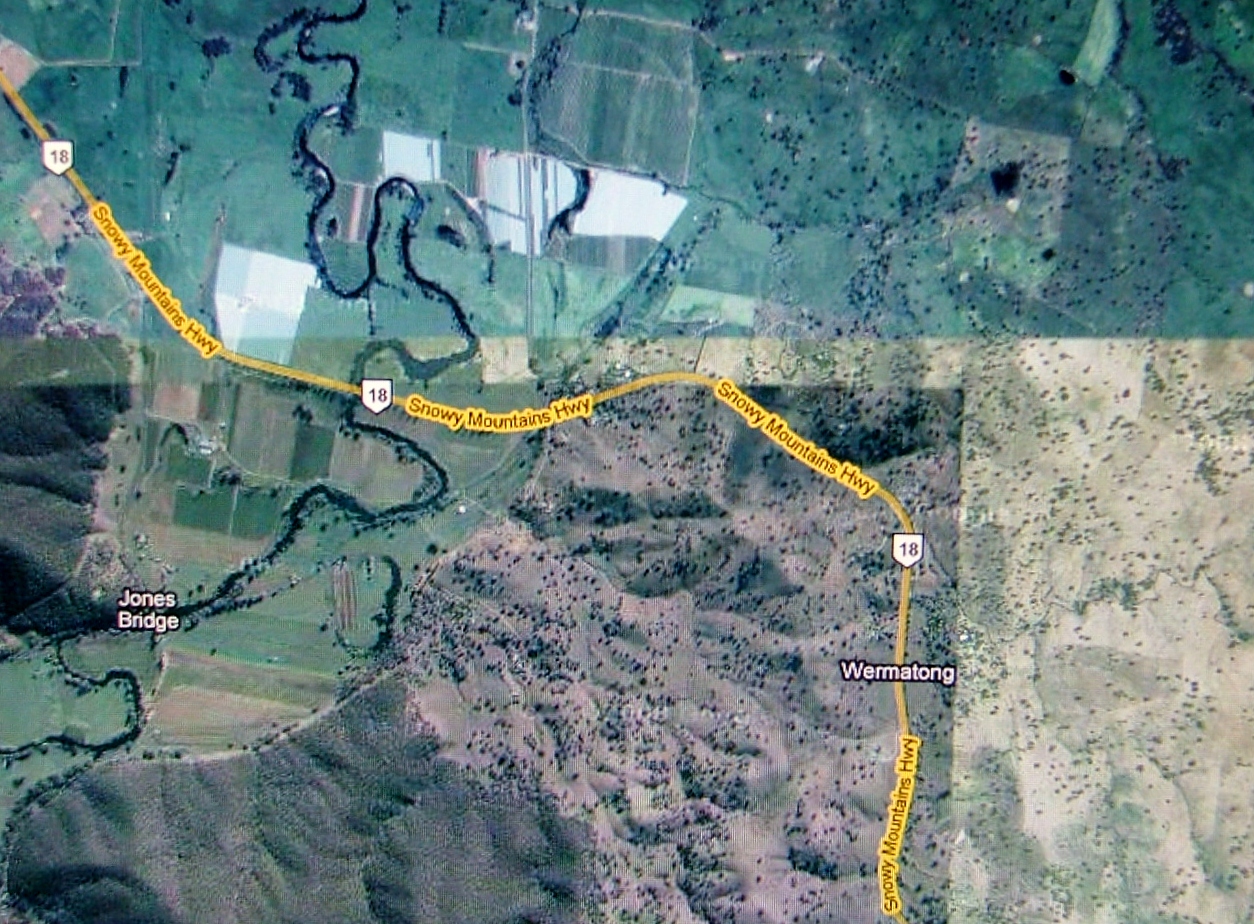 A message from Tumut (N.S.W.) states there was keen public interest in the sale of 733 acres of the famous lucerne growing flats In the Wermaton River district. The land is the pick of the grazing and fattening country, and is suitable for the production of mause, millet, tobacco leaf, and for dairying, having frontages to the Tumut and Goobragandra Rivers. Portion of the estate was a Government grant of 1,200 acres, and was later purchased by the late Mr. Harris. With acquisitions It has been in the faimly since 1852. The family still retains 7000 acres and the homestead. Prices realised per acre were Ł13/10/-, Ł20, Ł30, Ł26, Ł25, Ł18/10/ Ł32/10/- and Ł15 per acre. - (Ref- Townsville Daily Bulletin (Qld. : 1885 - 1954)(about) Previous issue Monday 12 September 1938 Page 3).

The late Mr. Hamlyn L. Harris, of Wermatong, Tumut, who died on July 5, was born in the East Indies in 1845, and was the son of Major-General H. L. Harris, 15th Regt. Madras Native Infantry, E.I.C.S. He was educated at Clifton College, England, and came to Australia in 1864.

1872, in conjunction with Mr. E. G. Brown, he bought most of the Tumut Plains Estate, and became managing partner, living at Wermatong. He married Miss Emily Shelley, daughter of Mr. George Shelley, who, with his brother, was the first landowner in the Tumut district.

1877 - an accident of a painful character occurred on Sunday last to a youth in the employ of Mr. H. L. Harris, at Tumut Plains. The lad, whose name is Henry Gibson, was, in company with two others, riding out upon the run, when he undertook to jump his horse over a fallen tree of immense girth.The horse failing to clear the log, throw his rider and then rolled upon him. Gibson was severely crushed and now lies in a precarious state. Dr. G. Selfe attended to the sufferer, who is a boy from the Randwick School. - (Ref- The Sydney Morning Herald (NSW : 1842 - 1954)(about) Previous issue Friday 13 April 1877).

Tumut - Bush Fires.-Large bush fires have been burning in the ranges to the south of the town, and the summits of the "Bogonga " were nightly illuminated by them.

1893 - Tobacco Culture.- Mr. G. F. Sutherland, to tabacco export, has taken up his quarters at Dr. H. W. Mason's farm at Bombowlee, and is now busily engaged superintending the management of the tobacco crop and in imparting instruction to growers in the best practical modes of harvesting and curing tobacco leaf. - (Ref- Australian Town and Country Journal (NSW : 1870 - 1907) Saturday 25 March 1893.

1897 - WEDDING - The marriage of Mr. Edward Croft, of Sydney, to Miss Amy Grace Shelley, daughter of Mr. W. J. Shelley, of Tumut Plains, attracted a large number of visitors to All Saints' Church; Tumut, on January 20. The bride, who was given away by her father, was dressed in white silk, with the usual wreath and veil. Her bridesmaids were the Misses Shelley (1), Miss Harris (of Wermatong), and Miss Croft, while Mr. Richard Croft acted as best man. After the ceremony the guests adjourned to the Oriental Hotel, where the breakfast was provided. Those present included the Rev. J. and Mrs. Bean, Mr. R. M. Shelley, Mr. H. Li. Harris, Mr. E. Brown, Mrs. Croft, Mr. Noel Harris, Miss Lucy Shelley, Miss Thompson. - (Ref- Australian Town and Country Journal (NSW : 1870 - 1907) Saturday 6 February 1897.)

1901 - The Tumut Flood. WIDESPREAD DAMAGE. Tumut, Thursday - The flood in the Tumut River recently has in many pases been destructive to oropa on the low-lying flats, as well as loose soil being washed away to the depth of the plough. Among those who suffered loss from the river overflowing its banks are : — Mr. James Howe, Petfield, fully half 1G aores of aron : Mr. F. Arantz. same looalitv, 4ft of water on parts of his farm, necessitating re-planting of whole of Mr. G E. Green, and other farmers, along Little River; Mr. A. M'Lennan, more than half of promising crop near Tumut Bridge; Dr. Mason, nearly 70 acres, and a quantity of soil at Bombowlee; Chinese gardener, Tumut Plains, Ł50 crop seed potatos.

Besides having done a vast amount of damage the deluge, has been instrumental In ridding many holdings of rabbits. Fully 2000 rodents were killed by a band of hunters at Mr. Harris' Wermatong Station, to say nothing of a number drowned. Some 60 hares were also knocked over, as well as a number of snakes. On a log in Gilmore Creek eight rabbits, two hares, and four snakes had found a perch and were destroyed by the discoverer. Reports from Lacmalac state that the flood in Little River was the greatest for 15 years, . and extensive damage was done to the crops and ploughed land. A party of 11 willing hands killed 126 rabbits on one holding, and 962 in all, besides whioh hundreds jumped -into the stream. (Ref- Bathurst Free Press and Mining Journal (NSW : 1851 - 1904) Friday 15 November 1901.)

1902 - MARRIAGE - The marriage of Mr. A. N. Stacy, manager of the Commercial Bank, Wilcannia, and Miss Florence Harris, eldest daughter of Mr. and Mrs. H L. Harris, of Wermatong Station, Tumut, tool place on October 29, at All Saints' Church, Tumut, which was prettily decorated for the occasion. The service was performed by the Rev. Owens Mell. The bride wore a dainty white luusliu dress, a wreath of orange blossoms, and ctulle veil, and was attended by her six sisters as bridesmaids. They wore frocks of whlte muslin, Rud huts of burnt straw trimmed with roses, their gold shamrock brooches hoing the gifta of the bridogroom. Dr S. Stacy, brother of the bridegroom, was best man; while Messrs. Noel and G. P.Iai'rl9 n»d C. It. Thomson acted as groomsmen. After the ceremony the guests were entertained by the bride's parents in O'Brien's Hall, after Which the newly-married pair left for their honeymoon in Tasmania. - (Ref- Australian Town and Country Journal (NSW : 1870 - 1907) Wednesday 12 November 1902.)

1912 - WEDDING - - Hamlyn HARRIS-EMANUEL.-On the evening of the 17th January, at Orielton, Tumut, N.S.W., the marriage of Geoffrey Hamlyn Lavicount, son of Mr . and Mrs. Hamlyn L. Harris (Wermalong Station), with Myra Beatrice, eldest daughter of Mr. and Mrs N. EMANUEL, took place. The Pistrjct Registrar performed the ceremony. Only immediate relatives were invited, and even then they amoun ted to nearly 100.

The drawing room was beautified with white flowers and a lovely wedding bell, under which the bridal pair stood. She looked extremely nice in a gown of white crepe^de-chene with pearl embroidery, and a tunic skirt of Brussels lace, a wreath of orange flowers with the beautiful veil. previously worn by her mother arranged thereon making a charming finish.

In the dining room the wedding presents were displayed. The verandahs and gardens were lighted with Chinese lanterns, a band playing all the evening At nine o'clock, to the 'strains of the Wedding March, the bride and bridegroom led the way to the marquee on the lawn, where a wedding supper was arranged.

1918 - WEDDING - On July 17 at the Church of the Epiphany, Port Said, Egypt, Captain Clement Wallington Harris, 2nd Light Horse Brigade, was mar- ried to Sister Agnes Florence Hills, 14th Australian General Hospital, Cairo .The bridegroom is the third son of Mr H. L. Harris, of Wermatong, Tumut and the bride is the daughter of Mr W. Hills, Marrickville, Sydney. The ceremony was performed by the Rev E W Hamond. The bride was given away by Major Geoff H L Harris MC, and was attended by her cousin, Sister Jean Smith. Both bride and bridesmaid wore nurses' uniform. The best man was Trooper G. T. H. Harris, brother of the bridegroom. After the ceremony a reception was held at Marina Palace Hotel, where the guests wero received by Miss Creal (Matron of 14th Australian General Hospital) and Major Harris. Later Captain and Mrs C W Harris left by train for Helouan Egypt, where the honeymoon was spent. Captain Harris has since rejoined his regiment in Palestine. - (Ref- The Sydney Morning Herald (NSW : 1842 - 1954) Wednesday 25 September 1918.)

1922 - Departure of Rev. W. Walker. On Monday last the Rev. W. Walker said "good-Jye " to the Church Wardens of Christ Church after what he termned an enjoyable holiday. At the Sunday services Mr Walker thanked the congregation for the hospitality and friendliness which had been shown to him.

These sentinients were reciprocated largely because of, his scholarly addresses 'and the' robust doctrine of his teaching. The big jolly Irishman " had a way wid him" that made for friendship. Mr. Walker has gone to the house of his father in-law Mr. Harris, of Wermatong station a pastoralist of the old school near Tumut. (Ref- Queanbeyan Age and Queanbeyan Observer (NSW : 1915 - 1927)Friday 27 January 1922.

It is a meeting of the big Harris clan from all parts, of Australia to join in the festivities in connection with the golden wed ding of Mr. and Mrs. Harris. That touch of the brouge will help in the gaieties at Wermatong.

WEDDINGS. - HARRIS-PROUDFOOT. - The marriage was celebrated at St. Paul's Church of England, Chatswood, on May 21, of Miss Mollie Proudfoot, youngest daughter of Mr. G. T. Proudfoot, of Montrose, Cottesloe, W.A., and Mr. A. L. Vernon Harris (late A.I.F.), youngest son of Mr. and Mrs. H. L Harris, of Wermatong Station, Tumut. Rev.Edward Walker officiated. The bride, who was given away by her father, wore a furtrimmed three-piece travelling suit of nigger brown, and carried a posy of violets. She was attended by her sister, and Mr. G. T. H. Harris acted as best man. After the ceremony the guests were entertained by Mrs. Walker at the rectory. - (Ref- The Sydney Morning Herald (NSW : 1842 - 1954) Tuesday 3 June 1924.

1925 - OBITUARY. - A sturdy old pioneer of New South Wales passed away with the death of Mr Hamlyn Lavicourt Harris on Julv 5, 1925 at Wermatong Station, Tumut, N.S.W. The late Mr. Hamlyn Harris was approaching his 80th year when he died. He was the only surviving son of General Lavicourt Harris (India), and came to New South Wales in early life, taking up jackerooing on Mr. Henry Whitty's sta- tion, Taramia, N.S.W., who later married Mr. Harris's sister.

1935 - AIR SERVICE TO TUMUT. - TUMUT, Thursday. - An air service is being established between Sydney and Tumut, via Bowral and Canberra. Pilot P. G. Collins, chairman of directors of Eastern Air Transport Company, In a Monospar machine, arrived to make all necessary arrangements, and has fixed upon a landing-ground at Wermatong Station, Tumut - (Ref- The Sydney Morning Herald (NSW : 1842 - 1954) Friday 22 February 1935.)

TUMUT, Monday.-Keen public interest was centred in the sale of the famous Wermatong River flats, of which 733 acres were submitted to auction, in eight farms, for the trustees of the settlement of the late Mr. L I. Harris.

The land is the pick of the grazing and fattening country, and is suitable for the production of maize, millet, tobacco leaf, and for dairying, having frontages to the Tumut and Goobragandra Rivers. Portion of the estate was a Government grant of 1,200 acres, and was later purchased by the late Mr. Harris. With acquisitions it has been in the family since 1852.

A few years ago, Ł17,000 worth of the estate was sold by auction, and the present realisation amounts to Ł16,200, the family still retaining 7,000 acres, including the homestead.

Bidding was spirited, and good prices were secured,in some cases adjoining farmers adding to their holdings. The following prices were realised:- 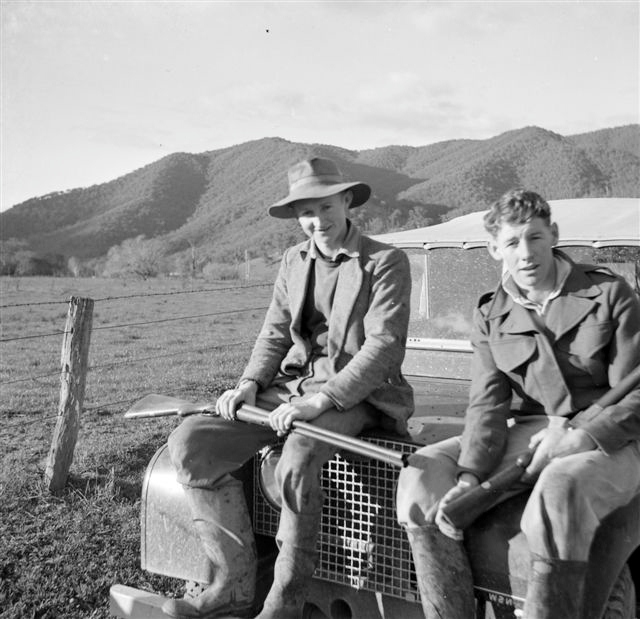 At the time of resumption of land for the Blowering Dam that valley and this small land acquistion of only 19 acres was taken for the Snowy Mountains Highway diversion in about 1966.

Embarkation details Unit embarked from Sydney, New South Wales, on board HMAT A20 Hororata on 2 May 1916

Details of service in war: February 1900 - March 1901 in northern Cape Colony, Free State, and east Transvaal; with French’s cavalry division from relief of Kimberley (February 1900) to sweep to Heidelberg (October 1900).